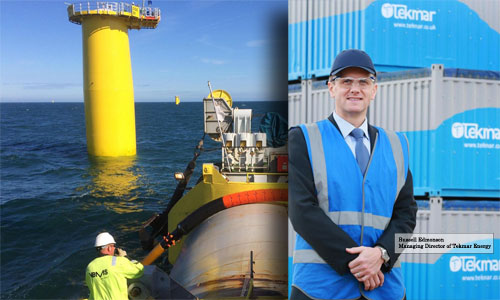 GREEN energy has come a long way since John Blyth installed the world’s first electricity-generating wind turbine to charge a battery at his holiday home in Scotland.

That was July 1887, and it was not until 1951 that the first utility grid-connected wind turbine to operate in the UK would be built in the Orkney Islands.

Two decades later and industrial scale wind generation was proposed, but progress has not been fast.

It was another 20 years before the first commercial windfarm opened in Cornwall.

Over the last 25 years public opinion has been mixed, especially for onshore wind farms, where residents at planning committees for contentious developments have claimed they will be a “blot on the landscape”, as well as citing concerns over efficiency, the effect they have on animals, the noise they emit and potential health risks.

Most fears appear to have been quelled, but to avoid “nimbyism”, they now tend to be built out at sea, and last year, wind power contributed to 18 per cent of the UK’s electricity generation.

Russell Edmonson, managing director of Tekmar Energy, which is based in Newton Aycliffe, says: “A lot of people don’t realise just how much electricity is produced.

“It is quite staggering how many wind farms there are, even in the UK, and the UK is the market leader for it.

“People do not realise it because they are over 20 miles away offshore.”

The 30 metre-long systems, made from polyurethane and cast iron, connect to the seabed, and the cable to land, and the bottom of the wind turbine base, to prevent the thick wiring being damaged by the saltwater of the sea, tidal movement and storms.

The new wind farm will be made up of 165 turbines with a combined total capacity of 1.4 GW, providing clean electricity to well more than 1.3 million homes.

The sister project to Hornsea One, which has 170 smaller turbines, is set for completion in 2022 and Tekmar, which employs 115 people, will be providing 346 cable protection systems.

Russell says: “Around 60 per cent of our revenue is in offshore renewables or wind farms.

“It is the only way to mass produce renewable technology. As an industry, it is growing at around 20 per cent per annum.

“What is very interesting is a lot of big developers are now competing at a zero subsidy level.

“They are undertaking projects with no subsidy from the Government and that means, as an industry, it is slowly transitioning from a Government decision to a commercial decision.

“It is opening up the rest of the world. Europe has led the way in offshore wind power and the technology has been developed and proven. Now the Americans are slowly starting to get on board and we are doing lot more work in Asia. It is very much a growing industry and there is huge potential.”

Tekmar was started by two Norwegian oil and gas industry divers in 1985 as an engineering and projects business, but over the last three decades has transitioned into making products on site and moved into renewables in 2008.

Wind turbines are made in mainland Europe by suppliers such as Siemens before blades are shipped and completed in Hull, but Russell says several companies in the North-East make up the rest of the supply chain.

He says the growing awareness of the need for green energy production means there is now plenty of scope for further opportunities for employment in the sector.

“The North-East is a hub for offshore companies,” he says. “You ultimately have pretty much everything you need, except the turbines, in the North-East to build a wind farm, which is pretty unheard of.

“You have everything from companies who are product suppliers to cable manufacturers to installers.

“There is an entire supply chain in the North-East. It is an industry that is growing so there is huge scope for job creation.

“It is very much a projects industry. We are very much driven by when these projects are green-lighted and how quickly they can go into production.

“The good thing about the renewables market is there is a lot of foresight in the pipeline so you can see what is coming from 12 to 24 months out.”

Hearing the benefits of ‘old’ technology