The Dublin cooperative, known for brutalist buildings that create generous open spaces, is only the second women-led practice to win the prize.

Grafton Architects, the Dublin practice led by Yvonne Farrell and Shelley McNamara, has been named as the recipient of the 2020 RIBA gold medal, the UK’s highest honour for architecture. It marks just the second time in the award’s 172-year history that the prize has been given to a women-led firm, following Zaha Hadid’s win in 2016.

It says a lot about the duo that their practice is named not after themselves, but the street in which they set up their office. For Grafton, place is more important than personality, and making good buildings a higher priority than theory, rhetoric or appearing in magazines.

Architecture biennale 2018: all hail the new queens of Venice 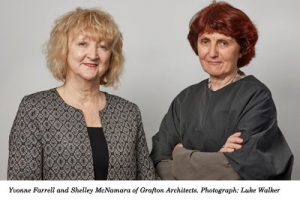 If Farrell and McNamara don’t fit the usual celebrity architect mould, their buildings also feel of another era. They are interested in weight, mass, and the play of light on hefty volumes of concrete and stone. They sculpt spaces from great mineral slabs and soaring buttresses, carving out volumes in a manner reminiscent of heroic brutalist buildings of the postwar era. Their structures sometimes have an archaic, primitive quality, providing robust armatures for any number of different uses that might occur within their walls over the coming centuries that they look designed to endure. In a world of lightweight frames and clip-on cladding systems, this is solid architecture that is built to last.

Grafton’s medal win follows the award of the inaugural RIBA international prize in 2016 for the “best new building in the world”, which went to their jaw-dropping building for the Universidad de Ingeniería y Tecnología (UTEC) in Lima, Peru. Standing above a motorway like a chunk of a stadium, the muscular concrete structure provides laboratories and classrooms in a vertiginous stack of terraces, connected by open walkways and meandering social spaces, feeling like a true extension of the city, cleft from the hillside.

“We like to create spaces you couldn’t design consciously, things that just happen somehow,” McNamara told me at the time. “Rather than thinking of a space and then finding a structure for it, we make a structure and that, in turn, makes a space.” They say they are interested in “the spaces in between, which haven’t been asked for in the brief” and describe their architecture as a kind of “scaffolding”, a non-prescriptive framework on which lives and events can be played out.

Selected to curate the Venice Biennale in 2018, they set the theme as “Freespace”, which they described as “a generosity of spirit and a sense of humanity at the core of architecture’s agenda”. They spoke of the “free and additional spatial gifts” that architecture can offer – a core idea of their own buildings, which often feature generous, open, free-form spaces to be occupied as people see fit. Steps, benches, terraces and broad landings loom large. Current projects in the works for universities, including the London School of Economics, Kingston University and Toulouse, are all conceived as open, inviting forums.