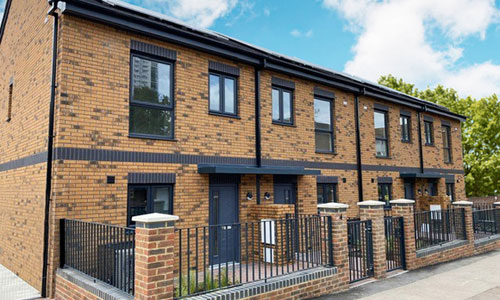 Visitors to Greenwich can now catch a glimpse into the future of social housing, with the unveiling this week of four zero-carbon council homes in the South London borough.

The homes are fitted with individual air source heat pumps and solar panels and have been designed to exceed net-zero carbon standards, meaning they are capable of delivering energy back to the grid.

Moreover, the homes boast have an EPC rating well above the highest category of A. Currently, just one per cent of UK new builds are A rated, while the average rating is D.

The homes were manufactured by modular housing firm ilke Homes at their factory in Yorkshire. ilke Homes draws on the latest digital technologies – such as Building Information Modelling, which creates a digital copy of homes so that their energy performance can be modelled – to improve the airtightness and quality of home design.

The four council eco-homes were then craned into place and installed in Robert Street, Woolwich, following enabling works carried out by engineering giant ENGIE, which included the demolition of the existing site, substructure work, and utility connections.

“Rather than using carbon offsetting schemes, which is a common occurrence when the industry talks about net-zero, all the carbon savings are achieved by the technologies of the homes themselves,” said Matthew Bench, executive director of partnerships at ilke Homes.

The new homes are part of Greenwich Council’s drive to meet its twin pledges to deliver 750 new council homes and reach net-zero carbon emissions by 2030. The council declared a climate emergency earlier this year, while acknowledging the scale of the challenge it faces it if to match the Mayor’s aspiration to make London carbon neutral by 2030 – two decades ahead of the UK’s national target. The council estimates that its homes are responsible for 20 per cent of emissions in the borough – with the cost of retrofitting them all around the £1bn mark.

“These high-quality and sustainable council homes are the first of 750 we’ll be delivering across the borough as part of our Greenwich Builds programme,” said Royal Borough of Greenwich Cabinet Member for Housing Cllr Anthony Okereke.

“Addressing the shortage of social housing is a top priority for the Council and we’re delighted that Robert Street, our pilot Greenwich Builds development, is now ready for local families to move in.”

His comments were echoed by Simon Lacey, regional managing director for ENGIE’s places and communities south division, who said the new homes were “a step change for Greenwich and will provide more affordable housing in their borough”.

“As the world leader in carbon reduction and renewable energy, ENGIE is poised to continue working with our partners to deliver similar schemes over the coming years and play an integral part in making zero carbon happen,” he added.

MMC SYSTEMS TO BE FAST-TRACKED FOR NHBC WARRANTY

3D – A Two-Storey House in Two Days
Scroll to top