Blog - Latest News
You are here: Home / Latest News / Living with Beauty Report – who does it benefit 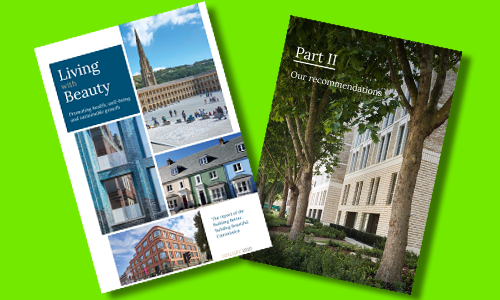 The government has released the report of the Building Better, Building Beautiful Commission.  Our readership constitutes individuals who collectively would have to bring about the changes recommended in this report. Whilst it acknowledges the desperate need for social housing, it also seems to hark back to a time when money and time where in greater supply and ideals of philanthropy so perfectly demonstrated in housing provision by individuals such as George Cadbury could be expounded without compromise.  In such times individuals rather than government bodies were far more in control of social house provision and that allowed their vision to be bridled only by the funding at their disposal.

The report focuses strongly on the negative role of the motor car when affecting design in both our homes and the spaces around them but it asks for a complete re-think of planning which would be difficult without the virtual eradication of the motor cars.  Without a technological advancement that is quite beyond our current status, the replacement of the car is not going to happen quickly.

Given that the times we live in are so radically different from those of the late 19th early 20th centuries, we question whether the approach suggested by the report has any practical relevance to construction today.  It might be suggested that the report tells us nothing that we do not already know and equally gives no real solution, which raises the question, what is the point?  We have included some extracts from it below and would really welcome the comments of those of you who look at our industry from the mud and grit of the construction site rather that what might be seen as the view from ivory towers, where distance blurs the hard edges of reality.

……….It is not often that a government adopts beauty as a policy objective. But such is the remit of this Commission, and we fully endorse the thinking that has led to it. It is widely believed that we are building the wrong things, in the wrong places, and in defiance of what people want. A comprehensive recent study agrees, arguing that about three quarters of new housing developments are mediocre or poor.1 At a time when there is an acute shortage of homes, there is therefore widespread opposition to new developments, which seem to threaten the beauty of their surroundings and to impose a uniform ‘cookie cutter’ product that degrades our natural and built inheritance. People want to live in beautiful places; they want to live next to beautiful places; they want to settle in a somewhere of their own, where the human need for beauty and harmony is satisfied by the view from the window and a walk to the shops, a walk which is not marred by polluted air or an inhuman street. But those elemental needs are not being met by the housing market, and the planning system has failed to require them. The Commission on building beautifully was set up at the end of 2018, asking us to review the planning system that has regulated construction in our country over the last hundred years. Ours is a discretionary system. The right to build has been nationalised. However, it does not proceed by top-down control from government, but by the granting of permissions decided locally. This allows a voice to the many interests involved, including the interests of neighbours, and reflects the historical origins of our legislation, largely introduced under pressure from civic associations motivated by the desire to protect our natural and architectural legacy from thoughtless destruction in the wake of the industrial revolution. It has also meant that, in comparison with many other countries, the planning process as we know it is both uncertain in its outcome and unclear in what it permits, involving high risk for the developer and sparking often fierce resistance from local communities. Large estates of low-quality housing naturally arouse opposition from those whose amenities and property-values they threaten, and precious aspects of our built environment and countryside give rise to a strong desire to protect them from changes that might spoil them. The cumulative effect of this, together with a rise in litigation from developers, has been a stagnation in the planning process, and a sense that – despite the greatly increased wealth that this country now enjoys, in comparison with what was enjoyed by our predecessors in the early 20th century – we are building less beautifully than they, and indeed littering the country with built debris of a kind that nobody will want to conserve. What has gone wrong, and how can we change it? Those were the questions before the Commission, and this report is our answer to them. It is not the final answer; but it is the first step towards understanding the direction in which our planning policy should go…………..

….. Cities built with the aim of accommodating the car therefore have to look very different from the traditional city. If three parking spaces are required per household, as occurs in some local authorities, then terraces, streets, squares and mansion blocks become nearly impossible. The traditional shopping crescents and high streets tend to be abandoned and replaced with out-of-town retail centres, surrounded by fields of cars. Offices and government buildings are transferred to business parks, with their own parking lots. Walkability and mixed-use neighbourhoods are swiftly imperilled. We do not need to imagine this: in much of the United States it is the norm, with residential settlements starting life and remaining as car-dependent sprawls. Once the car starts to take over, the process becomes self-reinforcing: even people who would prefer to walk to the shops have to drive if there are no shops in walking distance……

……… The government of Harold Macmillan did oversee the rehoming of vast numbers of the poorest families out of inner-city slums into the ‘fresher air’ of the new housing estate; arguably the highest annual delivery of new homes we have seen in this country. However, what happened next was cheap system-building, often corrupt procurement, the ‘vertical slums’ that were poorly constructed and often equally poorly managed, leading to isolation and crime, that and were a far cry from the neighbourliness and family life they promised. We have learnt from these mistakes. Over more recent decades, new affordable housing has often been built by housing associations and councils to higher space and design standards than much of the housing for sale that this Commission has seen. As landlords, housing associations and councils have a long-term stake in these places and a commitment to the people living there, to offer the best quality of life they can. However, the severe shortage means that opportunistic developers can abuse permitted development rights to produce accommodation of the lowest quality to house those with no alternative. As the TCPA’s Raynsford Review pointed out, there is no beauty in a child having to use a car park as a play area or being housed in a glorified shipping container next to a flyover, on the argument that it is better than nothing. We believe that all homes – new build or conversions – should meet minimum standards for space, amenity and comfort, as well as the safety of the people that live there…..

Mammoet takes on the heavy lifting for the World’s Tallest Observation Wh...