A Gwynedd town will see the site of its former railway station transformed into affordable homes as work begins on a new housing development.

Housing association Grŵp Cynefin, which owns and manages 4,800 properties across all six north Wales counties as well as northern Powys, has commenced construction on a £2.5 million project to build 17 new homes in Bethesda.

The development, which will be built by Gareth Morris Construction of Llangollen, will contain eight two-bedroom properties, five two-bedroom bungalows, three three-bedroom houses and a single four-bedroom home.

The properties will take over the site of Bethesda’s former railway station, which shut in 1963, as well as the old clubhouses of Bethesda Athletic FC and Bethesda RFC, which are now at new locations. 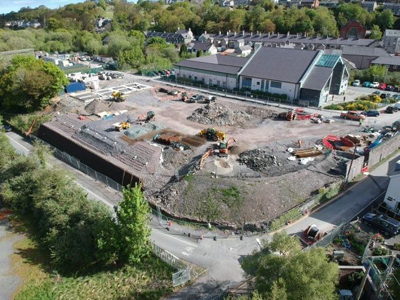 The homes will be let on a social housing basis, with the development a partnership between Grŵp Cynefin and Gwynedd Council. The project is partially funded through a social housing grant from the Welsh Government.

Development manager at Grŵp Cynefin, Gwyndaf Williams, said: “Providing affordable and accessible homes, particularly in rural communities, is at the core of our work and we are incredibly excited to have finally commenced construction on this project.

“There is a real need for housing families and couples around Bethesda, so this development will support those looking to remain living in the area who may have struggled to find affordable housing in the past.”

Construction on the site is expected to finish by March 2022, with the homes built to meet the Welsh Government housing technical standards, which ensures all properties built under the scheme meet modern methods of construction and sustainability.

Gwyndaf added: “It is invigorating to develop these new properties on what was once one of the major meeting points in the town and we aim to honour as much of the site’s heritage as we can.

“We hope the residents of the new homes on this site will be able to put down roots as part of their local community thanks to the proximity of the site to regular public transport, recreational fields and the Lon Las Ogwen cycle route, a pivotal spot in the town.”

Chief executive of Grŵp Cynefin, Shân Lloyd Williams, said: “The development in Bethesda is a great way to showcase how we are working alongside the local community and local authorities to reduce the pressure on the affordable housing market in Gwynedd.

“Grŵp Cynefin is committed to providing high-quality affordable housing and this project is a step in that direction within the community of Bethesda.

“Schemes such as this one are essential to ensuring these communities remain intact and younger couples, families, and older individuals can still find a place in the areas they are comfortable and familiar with, while avoiding being priced out of the area entirely.

“We are thrilled to finally begin work on this development as it marks a major milestone in the life of this project, and we look forward to finally allowing tenants to move into their new homes as soon as we can.”