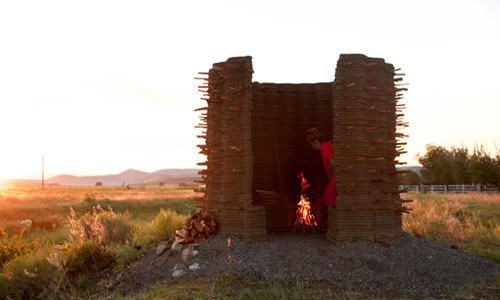 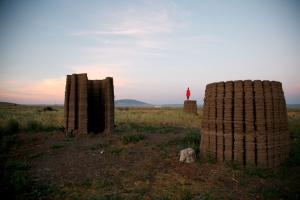 The structures take cues from the origins of the Rio Grande watershed in Colorado’s San Luis Valley, formerly the edge of the US-Mexico before 1848. Here, traditions from Ancestral Pueblo cultures date back to 700 CE and the Indo-Hispano cultures of northern New Mexico and southern Colorado date back to 1598.

The Emerging Objects team began by researching processes typical to the area, such as hand-modelled earthen structures, and mud and pottery that harvest clay from Sangre de Christo and San Juan mountains. They then worked with 3D ceramic print company 3D Potter to make a small portable robot called Potterbot XLS-1 to print designs on the sites they sourced soils.

“What we learned was really how accessible, robust, and powerful it was to print large scale structures so quickly using the soil just beneath our feet” Rael told Dezeen.

“We discovered work flows for printing, material mixture processes, structural applications, and theories about new and old ways of living and designing for the future using humankind’s most humble material.”

The sticks are used to join two walls together and protrude on the outside of the structure but are hidden inside – a relationship the architect likens to the “cultural differences between the architectural traditions of pueblo and Indo-Hispano buildings”. A curling mud bench wraps the inside of the tiny enclosure to meet a fireplace in the middle where juniper wood is burned.

Beacon was created to find a way to use a coiling mudwork to make the wall as thin as possible. Lights illuminate the indentations along wall at night time to give the structure its name.

Lookout, meanwhile, uses coils to create a staircase. “A dense network of undulating mud coils is laid out to create a structure that can be walked upon,” Rael added. The design also lays mud piping inside the walls into cross-shapes that can be used to create pockets of air that bolster the insulative properties of the designs.

“This also demonstrates how wide, yet, airy walls, can create interior enclosures that represent possibilities for insulation, especially in the harsh climate of the San Luis Valley that can drop below -20 degrees fahrenheit in the winter,” Rael said.

Kiln forms a culmination of a number of findings, including the coiling and criss-crossing mudwork, and adds a kiln for firing the 3D-printed vessels. The locally sourced juniper wood is are fired with juniper wood that give it a range of textures and hues.

“The products of the kiln, fired micaceous clay learning from the traditions of Taos and Picuris Pueblos, are hybrids of technology and technique,” said Rael.

“Emerging Objects explores these frontiers of technology and material using traditional materials (clay, water, and wheat straw), to push the boundaries of sustainable and ecological construction in a two phase project that explores traditional clay craft at the scale of architecture and pottery,” Rael said.

“The end goal of this endeavour is to demonstrate low-cost and low-labour construction that is accessible, economical and safe is possible.”

A particular highlight of the history is coil pottery, which uses layers of clay ribbons to form pieces.

Playing with this technique, the team made 170 vessels featuring varying bulges and markings – using the Potterbot to print the vessels with a ceramic 3D-printing software. It then developed the process to create a larger, 3D-printed adobe construction resembling series of bulging, rope-like threads from local clay.

“Excavated pit houses and above ground adobe structures defined the architecture of the Mogollon and by AD 400 this region witnessed the development of a distinctive, indigenous coil-and-scrape pottery tradition known as EI Paso Brownware,” said Rael.

Mud Frontiers by Emerging Objects was initiated in response to an article in the Smithsonian magazine called “40 Things You Need to Know About the Next 40 Years”. Number one in the list stated that “Sophisticated buildings will be made of mud”.

As part of the project, Rael San Fratello were testing a portable robot that they had created,

Other projects that have similarly experimented with mud construction include a biodegradable house created by 3D-printing technology developer WASP from soil and agricultural waste. French architect Stephanie Chaltiel, meanwhile, developed a prototype for emergency homes that is formed from a domed lattice sprayed with a mixture of clay and fibre using a drone.

The studio gained international media attention earlier this year when it installed three pink seesaws in between the metal slats of the US-Mexico border wall, so that children on either side can play together.

Photography is by Rael San Fratello.

The worldwide 3D Printing Materials Market is expected to reach $4.03 billion by 2025,

3D printing is one of the fastest growing technologies and is being rapidly adopted for manufacturing and other applications by various industries. According to the National Conference of State Legislatures organization, five important industries that have the greatest potential to be transformed by 3D printing in the next 5 to 10 years from 2017 include Heavy Industry, Automotive, Consumer Products, Healthcare and Medical, and Aerospace.