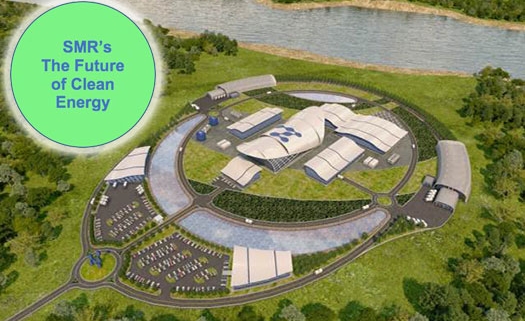 The International Energy Agency (IEA) says countries intending to retain nuclear power as an option in their clean-energy transitions should support innovative new reactor designs with lower capital costs and shorter lead times, such as small modular reactors (SMRs).
The recommendation is made in a newly released report, titled ‘Nuclear Power in a Clean Energy System’, released this week during the tenth Clean Energy Ministerial in Vancouver, Canada.
The report makes the case for sustaining nuclear, which currently accounts for 10% of global electricity generation, as an option to help meet global climate targets.
The report asserts that, while a clean-energy transition with less nuclear power is possible, a substantial rise in investment in other forms of power generation and electricity networks would be required.
The IEA calculates that the electricity sector in advanced economies would have to invest an additional $1.6-trillion between 2018 and 2040.
Securing investment in new nuclear plants would require a “more intrusive” policy intervention, however, particularly in light of the high cost of projects and unfavourable recent experiences.
The report highlights the long delays in completing advanced reactor projects in Finland, France and the US.
“They have turned out to cost far more than originally expected and dampened investor interest in new projects.”
The main obstacles to new nuclear investments are listed as including: the sheer scale of investment and long lead times; the risk of construction problems, delays and cost overruns; and the possibility of future changes in policy or the electricity system itself.
Interest is rising, therefore, in advanced nuclear technologies that suit private investment such as SMRs.
“There is a case for governments to promote it through funding for research and development, public-private partnerships for venture capital and early deployment grants.”
Standardisation of reactor designs will be crucial, however, to benefit from economies of scale in the manufacturing of SMRs.
South Africa’s Pebble Bed Modular Reactor (PBMR) programme was officially closed in 2010, owing to funding constraints and an inability to attract an investment partner.
The intellectual property was retained by the PBMR Company, a wholly owned subsidiary of Eskom, which subsequently developed a conceptual outline for converting the PBMR into an Advanced High Temperature Reactor.
Eskom is facing serious financial constraints and is unlikely to be in a position to invest in nuclear research and development.
South Africa’s yet-to-be-concluded Integrated Resource Plan includes an assumption that the life of the 1 800 MW Koeberg nuclear power station, in the Western Cape, will be extended by 20 years to 2044.
The draft IRP, currently the subject of consultation at the National Economic Development and Labour Council, does not preclude the development of new nuclear capacity, but states that such capacity would by added at a “scale and pace that will not have a negative impact on the economy”.
No new nuclear capacity is envisaged for the period to 2030, representing a marked deviation from the current outdated IRP, which controversially catered for the introduction of 9 600 MW of new nuclear capacity between 2023 and 2030.

The Benefits of AI In Construction

Ilke and Places for People Join
Scroll to top