Solar energy is poised for what could be its biggest transformation in over half a century.

A group of materials called perovskites are being used to create the next generation of solar panels, which could eventually be twice as efficient as current models, and flexible enough to wrap around entire buildings.

The first solar cell capable of powering everyday electrical equipment was made in the 1950s at Bell Labs in New Jersey. Back then the silicon-based panels were hugely expensive and converted just 6% of sunlight into electricity.

Since then, costs have come down dramatically and today’s silicon solar cells can turn up to 22% of sunlight into power. But they’re nearly maxed out in terms of efficiency. Now, perovskites offer the potential for dramatic increases in power output, and they could ultimately replace silicon altogether. 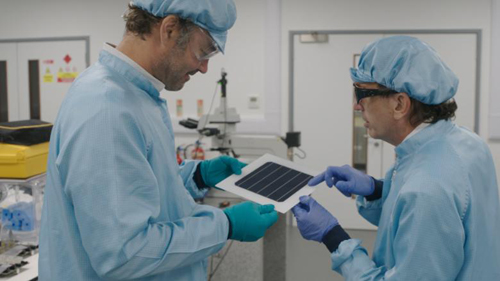 Henry Snaith, left, and Christopher Case, of UK company Oxford PV, which is working with perovskite to generate solar energy. Case says the material is “the most significant development in solar photovoltaics in 65 years.”

Researchers at Oxford PV, a company spun out of the University of Oxford, made a major breakthrough in 2018. By coating silicon with perovskite they achieved 28% efficiency. The company believes it can eventually reach 40%, or higher.

Improved solar cell efficiency will enable installations to pump out more power with fewer panels, reducing costs, and the amount of land, labor and equipment needed to operate them.

“If we want to make it that all new power generation is solar photovoltaics, then we need to keep driving the price down,” Henry Snaith, professor of physics at the University of Oxford and co-founder of Oxford PV, tells CNN Business. “One way to do that is to keep pushing the efficiency or the power output of the module up, and this is where perovskites really come into play.”

Perovskite was discovered in 1839. Oxford PV uses a synthetic version, made from inexpensive materials that are abundant in the Earth’s crust, while other companies use variations of the original mineral, collectively called perovskites. 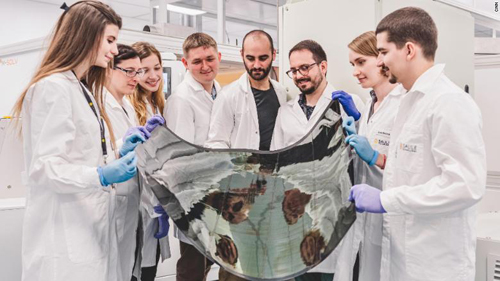 A tube of Oxford PV’s perovskite material, which is synthesized from materials that are abundant in the Earth’s crust.

As well as improved solar efficiency, they work better than silicon in the shade, on cloudy days or even indoors. Perovskites can be printed using an inkjet printer and can be as thin as wallpaper.

“In the coming decades, all-perovskite solar coatings promise to raise efficiencies even further, reduce the weight and shipping cost of solar equipment,” says Varun Sivaram, energy expert and author of “Taming the Sun: Innovations to Harness Solar Energy and Power the Planet,” who worked with Snaith while studying at Oxford.

He says that as the technology develops, perovskite could be sprayed or rolled onto flexible surfaces. Semitransparent solar coatings could even be wrapped around whole buildings.

Oxford PV aims to begin producing cells made from perovskite on silicon early next year at a new purpose-built factory in Brandenburg, Germany. It estimates that panels made from the cells could save homeowners up to $1,000 on the purchase and installation of the average solar system.

Other companies working with perovskite include Warsaw-based Saule Technologies, which has secured funding of €10 million ($11.7 million) from Polish photovoltaics company Columbus Energy.

Last month, Saule Technologies’ new factory in Warsaw began printing perovskite solar cells using inkjet printers. Early next year, it will start supplying Swedish construction company Skanska Group, which says it wants to be the first developer to attach printed solar cells to the façade of a building on a commercial scale.

“It is set to be a game-changer in the energy sector, because it works in every lighting condition,” says Saule Technologies co-founder Olga Malinkiewicz. “You can make it flexible. It’s a wonderful material. Architects will love it.”