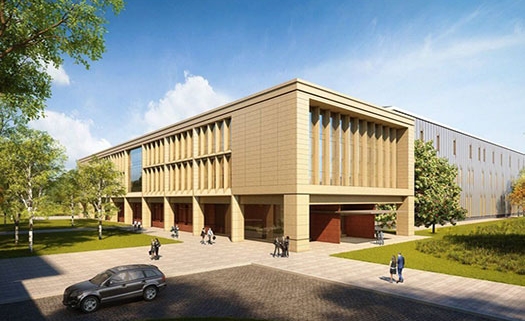 In the face of security fears swirling around the Chinese tech giant, will the company confirm its plans to develop a research facility near to the village of Sawson in Cambridgeshire.

If it goes ahead 45,000 sq m of floorspace will be built on an area bought by Huawei for £37.5m. The land was originally the site of a now derelict paper mill.

The new facility, which will include a small-scale manufacturing centre to build prototype chips, is expected to create up to 400 jobs.

But the firm will first have to win consent from local planning officials and councillors and consult residents at a time of heightened controversy over possible links to the Chinese government. Its own timetable shows it is due to formally apply for permission to build the site in “late May” 2019.

The company itself appears to be committed to the UK, where it has 1,400 staff, recently promised £3bn of investment and procurement by 2022 and has partnerships with 10 universities including Cambridge.

The proposed facility also shows its attraction to Cambridge, which has been dubbed “Silicon Fen” because of the boom in technology firms clustered around the city in the Fens region.

Huawei would be looking to benefit from proximity to more than 5,000 ‘knowledge-intensive’ firms based within 20 miles of Cambridge, including IT, telecoms, high-tech manufacturing, life sciences and healthcare companies.

But Huawei will only get the green light if its construction and design get through the many rules, checks and hurdles involved in the British planning system.

A Modern solution, after 600 years