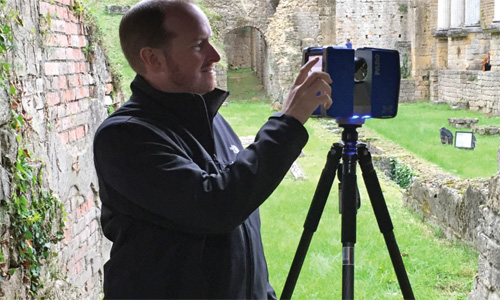 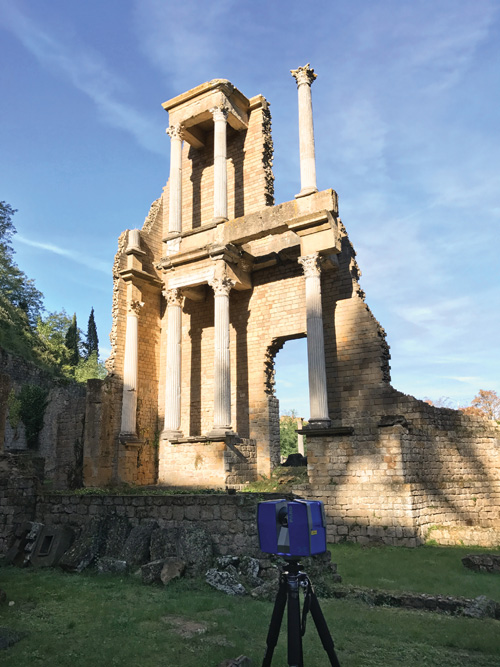 Scanning the left side of the Roman Theatre stage with a Faro X330. The two-level column facade was recreated from the remains found on the Volterra site. There were three groups of these two-level columns, part of the scaenae frons (Latin for “stage front”), which was a permanent stage backdrop typical in ancient Roman and Greek theaters.

Not many geospatial professionals enter the field thinking they will travel to Italy to document and digitize ancient sites. For many, it would be the ultimate adventure of combining history and technology—Indiana Jones without the boulders and snakes, and Star Trek without the intergalactic conflict. Three leaders in the Survey/Geospatial Practice of Civil & Environmental Consultants, Inc. (CEC) embarked on such an adventure to the town of Volterra as part of an international research team for two trips over the past three-year period.

Produced by Autodesk and Case Technologies, the humbly named “workshop” is executed through the Volterra-Detroit Foundation, which is a previously established relationship between the city of Volterra and the University of Detroit Mercy School of Architecture. The focus of the workshop was reality capture. New to most surveyors at firms, reality capture is enabled by photogrammetry, which is the use of   photography in surveying and mapping to measure distances between objects. 3D models using photogrammetry can be combined with geographic information system (GIS) visuals such as land surface, roads, and rivers to create more complete georeferenced 3D digital models. These mapped sites can be viewed in a virtual environment.

Digital historical preservation of this kind is important to better document and monitor architectural treasures, especially as they deteriorate over time or are destroyed by natural disasters (earthquakes are not uncommon in Italy, and Volterra is particularly susceptible to landslides). By capturing data every few years, professionals can measure the shifting and deterioration that gradually occur over time. Historical preservation of this nature opens a window into history, ancient engineering and architecture, and archaeology for civilization to reference and enjoy for centuries to come, whether you’re a professional in the field or simply an interested member of the public.

Located approximately 50 miles southwest of Florence, the walled city of Volterra has been continuously inhabited for more than 3,000 years, with historic sites dating back to the fourth century B.C. The historic significance of Volterra is top of mind for Mayor Marco Buselli as he has been actively pursuing a World Heritage site classification from the United Nations Educational, Scientific and Cultural Organization (UNESCO). He knew that gathering data on and documenting the details of this village would likely support (and hopefully accelerate) the application process.

The primary equipment that Celender, Sinclair, and Bainbridge used for the data capture was a 3DR Drone with a GoPro and two Faro X330 LiDAR scanners.

Terrestrial Light Detecting and Ranging (LiDAR) scanners were used inside historic buildings such as the the Baptistery of San Giovanni and the town hall, where the team captured millions of intelligent data points about everything from the intricate artwork on the ceilings to the tiniest of cracks in a pillar. The points were used to create detailed 3D models of the structures and their features, as well as a BIM, which becomes a useful tool for architects and planners should there ever be a need for maintenance, restoration, or retrofitting. The team also scanned objects in Volterra’s museums.

However, most of the team’s work was done outside.

LiDAR scanners were used to document and digitize Porta all’Arco, the oldest standing Etruscan arch in the world dating back to the fourth century B.C. and the main pedestrian access into Volterra (yes, still used today!).

LiDAR scanners were also used to document a Roman theatre, which alone required 120 individual scan locations to capture the site fully. Constructed in the first century B.C. and originally housing 3,500 spectators, it was excavated in the 1950s and sits just outside the city’s medieval wall.

After reviewing their data, the team found that this particular Roman theatre did not follow the archetypal Vitruvian architectural design that so many other theaters from that time period follow. Individual pieces of the marble decoration, found in various places and often in multiple pieces, were post-processed in 3D and then virtually restored to their original location in the 3D model. The complete catalog of the decoration fragments was developed in collaboration with the Soprintendenza Archeologia in Florence. The 3D model of the reconstructed theater was rendered in 3DS MAX as well as processed in Revit® Live and Stingray software to create a virtual reality (VR) experience that can be accessed through tools such as the Oculus Rift and Samsung GearVR as well as through holographic displays.

A southward panorama of the Roman Theatre site. The theater was constructed in the first century B.C. and had a capacity of approximately 3,500 spectators.

In addition to these notable sites, the team scanned architectural details from around the city using high-resolution digital cameras (and even iPhones, which illustrates the advances of everyday technology) and then converted them to 3D models.Every evening, the team processed data captured during the day, taking the point clouds and creating a mesh, which turns the point cloud into a 3D model. With hundreds of scans to register and drone flights to process into point clouds, the team used multiple software programs and created a workflow akin to an assembly line. Data was collected from scanners and drones by one person and then distributed to two or three people to register. Additional team members would then process the data into 3D models.

“From there, we can take the mesh data and incorporate it into Autodesk® Civil ٣D® or Revit® to create an as-built model,” noted Sinclair. “We can truly recreate the space—put details in, tag it with data, etc. All the measurements of the BIM were based off the point cloud or mesh we created.”

“It was hectic but efficient,” Celender remarked.

After leaving Italy, the team continued the initial nine-month adventure analyzing and modeling the captured data. In June 2017, some team members from the workshop returned to Volterra with a few interactive models and 3D-printed replicas for a presentation in the town hall. The team treated Mayor Buselli, his staff, city residents, and representatives from UNESCO to a virtual reality (VR) demo that mimicked walking through Volterra’s historical sites, including a chance to experience the fully recreated Roman theatre in its original glory. The public was invited to experience the models throughout the following month.

The processing of data continued in the months that followed the workshop. The models of the museums’ artifacts began to be used in virtual exhibitions, for research, and for conservation efforts, with the option of being replicated using 3D printers for educational purposes.

In April 2019, the workshop reunited for a second trip which lasted for two weeks. New construction in Volterra had inadvertently unearthed evidence of more ancient architecture. Incredibly, what was identified as the remains of an ancient Roman wall turned out to be the first ancient amphitheater discovery in Europe for the past 150 years.

Bainbridge’s role was performing terrestrial laser scanning (using the phase-based Faro laser scanner as well as Leica BLK360 and RTC360 time-of flight scanners), establishing geodetic control with the Leica GS16 GNSS receiver and Leica Infinity software for areas scanned throughout the workshop’s tenure, and kinematic LiDAR capture of the Volterra streets using the Leica Pegasus Backpack with Simultaneous Location and Mapping (SLAM) technology. Sinclair’s primary role was capturing aerial mapping data via drones with mounted cameras. They uploaded point clouds to Cintoo, which triangulated that data and turned it into a solid. Team members then moved that data into Civil 3D® and Revit® to create models.

“It was surprising how accurate the point clouds from the UAV cameras were using photogrammetry when compared with precise ground-based LiDAR scanning,” Sinclair commented.

Unfortunately, due to significant ground moisture and depth of the ruins, the GPR scan results were not as successful, leaving much of the unexcavated extents discernible only by the surface topography.

“Surveyors always say we don’t have x-ray vision—GPR didn’t change that in this case,” Bainbridge commented. “One of the most difficult things we run into in the surveying profession is determining the location of things that we can’t see.” This served as a healthy reminder that surveyors don’t always get all of the data they’d like.

However, this second trip certainly wasn’t in vain. In addition to the data capture and modeling of the amphitheater, the Workshop completed subsequent scans on many of the same historic features from the first trip. Not only is the team documenting these artifacts and ruins in ways that allow the public to interact remotely through VR platforms such as Matterport, Cintoo, and Unreal, but the team has been able to make real data deliverables; for example, using the team’s laser scan information, Sinclair and Bainbridge produced a Civil 3D® surface and cross sections of the amphitheater, which allowed the city engineer to assess existing drainage structures and plan for upcoming excavation work.

What’s Next?
Many of Volterra’s historic sites are now digitized. The Roman amphitheater is currently on the “Tentative List” for Heritage Site classification from UNESCO.

“The opportunity to collaborate with an international team of architects, engineers, historians, and students to digitally record Volterra’s architectural history from the first century B.C. was amazing,” Celender remarked. “The support we received from Mayor Buselli was critical in our efforts. The access we had to the city, the Roman theatre, etc., to fly drones and to perform scanning missions was incredible. The wine and grappa [a grape-based brandy] were pretty memorable, too!”

“One of the most rewarding parts of this project has been using data we’ve captured to benefit the ongoing preservation efforts in Volterra,” Bainbridge said. “It’s easy to get caught up in the photo-realism of reality capture data and gloss over the fact that all of those beautiful colorized data points are actually survey-grade measurements. Before this workshop, my experience with GPR and magnetic line location had been in determining the approximate locations of utilities; I had never thought of applying this technology in the field of archaeology. We’ve come pretty far compared to the old days, which wasn’t actually that long ago—the days when surveyors made calculations in a notebook without the use of a calculator, and wrote down angles. Look where we are today!”

This advanced technology—and this team’s novel yet crucial use of that technology—is quickly becoming a game-changer in our industry.

Modular Growth forecast for next 6 years