India has the world’s worst air pollution. Home to 21 of the world’s 30 most polluted cities, its toxic air kills more than one million people each year.

That’s partly because the South Asian nation is the world’s second largest brick producer. Brick kilns — which account for 20% of black carbon emissions globally — make a significant contribution to its terrible air.

Indian architect Tejas Sidnal was shocked to discover the construction industry’s role in the pollution crisis. “That was a crazy eye opener,” he says. “As architects, we are responsible for so much air pollution. We can do better.”

The air shrouding India’s cities often contains dangerously high levels of fine particulate matter, known as PM2.5, which has been linked to lung and heart disease and can impair cognitive and immune functions. In 2019, New Delhi declared a public health emergency after suffering record levels of smog.

PM2.5 includes black carbon, a substance which can absorb one million times more energy from the sun than carbon dioxide in the days or weeks it stays in the atmosphere.

Reducing pollutants such as black carbon could help slow global warming and improve air quality, experts say. Many companies are exploring the commercial potential of capturing carbon dioxide emissions, but few are focused on black carbon, according to Sidnal.

“We found a way to add value to this recovered carbon by using it as a pigment in carbon tiles,” he says.

To create the carbon tiles, Carbon Craft Design partnered with Graviky Labs, an Indian company that previously created “Air Ink,” a technology that captures carbon soot from cars and factories, and converts it into ink and paint. 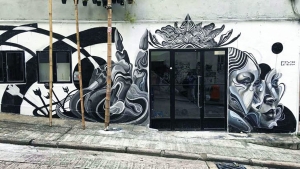 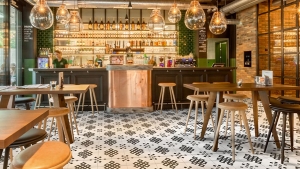 Carbon Craft Design’s floor tiles, made with black carbon extracted from dirty air, could help to combat India’s air pollution crisis. Scroll through to see other technologies that could transform the construction sector: Carbon Craft Design

Graviky Labs uses a filter device to capture carbon soot from diesel exhaust and fossil fuel generators, removes contaminants such as heavy metals and dust from the soot, and gives the purified carbon to Carbon Craft Design in powder form.

“Graviky Labs views pollution as a resource,” company founder Anirudh Sharma tells CNN. “We are one of only a few companies in the world to capture these carbon emissions and turn them into new materials.”

Carbon Craft Design mixes the captured carbon with cement and marble waste from quarries to produce monochromatic tiles. Sidnal says the company aims to ensure each tile contains at least 70% waste material. It sells the tiles to architects and retailers for $29 per square meter — a high price compared to regular ceramic tiles.

As the company scales up production, Sidnal hopes to lower prices and produce a cheaper range of carbon tiles. “We want to hit the affordable sector,” he says. “Sustainability is not only for the elite.”

Since launching its first tiles a year ago, Carbon Craft Design’s customers have included global fashion brands and architecture firms in India. In November 2020, the company retrofitted an Adidas store in Mumbai, covering the walls and the floor with its carbon tiles.

Architect Manan Gala, whose firm Bombay Contractors designed the Adidas store, describes the carbon tile as a “winner” for the construction industry. As well as being sustainable, “the product has better strength than conventional cement tiles due to the carbon content, and the raw and rustic feel adds to the overall charm,” he says.

Carbon Craft Design is currently raising investment and hopes to start distribution in Europe this year, says Sidnal, adding that “we are swamped with inquiries from in and out of India.”

THE LARGEST WINDFARM IN THE WORLD

185 HOMES SHIPPED FROM YORKSHIRE TO BRISTOL
Scroll to top