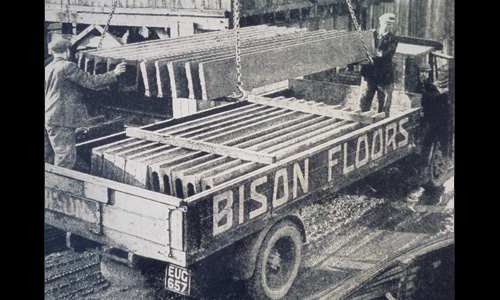 As Bison Precast celebrates 100 years in business, we reflect on its remarkable history and ability to remain at the forefront of building innovation.

Bison Precast is a business built on sturdy foundations. Originally named Concrete Ltd, it was established in 1919 by JG Ambrose and CB Mathews, two Royal Engineers who had developed expertise in concrete while creating pillboxes used on the Western Front in the Great War of 1914-1918. The business’s success throughout the last century, in an often-challenging market, can be attributed to those two men and their principles of professionalism and responsiveness to the industry’s requirements.

A century of innovation

When they opened their first factory in 1919, in Leeds, concrete’s popularity as a building material was growing. Initially, the factory specialised in the manufacture of precast reinforced concrete floors and, despite the challenges of the post-war years, they were soon able to open factories in the south and the north, to meet growing demand across the country for their products.

During the 1930s, the company continued to develop new products. In 1935 it invented the pneumatic core, which revolutionised the manufacture of hollow concrete floors. It also developed the L-section unit for theatre balconies, a refined version of which continues to be used in grandstand terracing and seating.

During World War II, the company created a mobile version of the pillbox – the extemporised armoured vehicle known as the Bison, and to which the company would later change its name. In the post-war years, the company played a significant role in the rebuilding of Britain’s war-damaged factories, hospitals and government buildings, where its precast floors and the speed at which they could be assembled proved invaluable.

A lack of structural steel during this period led the company to develop pre-stressing techniques and by the early 1950s the Bison Preferred Dimension Frame was introduced for use in factories, hospitals and office buildings where large areas of floorspace were required. The following decade, the company’s Wall Frame System, which was the first fully industrialised all-British system for high-rise blocks of flats, helped to meet the country’s growing housing demand, and received the Queen’s Award to Industry in 1967.

Into the 1970s and the Bison Beam was developed, in 1974, in response to changing market needs and new mandatory requirements for ground floors. The beam’s immediate success resulted in it becoming the generic term for suspended ground floors in housing, and led directly to the use of hollowcore pre-stressed beams for intermediate floors in single-occupancy dwellings. It also saw Bison truly established as one of the leading lights in British construction.

As the Bison product range has developed over the course of the century, so too has the range of sectors it serves. Today, it provides concrete flooring, structural and architectural products for use in the construction of large infrastructure projects, car parks, healthcare, custodial, leisure, stadia, industrial, residential and commercial schemes – helping to create some of Britain’s most prominent landmarks.

In 1998, Bison started the manufacture and supply of 1000m³ of terraces, walls, beams and stairs, and 45,000m² of hollowcore flooring for use in the building of the Millennium Stadium in Cardiff, ensuring it would be ready for the Rugby World Cup in 1999. Just a handful of years later in 2003, it began the casting of more than 90,000m² of hollowcore flooring, and over 13,000m³ of precast concrete to form 55 kilometres of terracing, ancillary steps, walls and stair flights at the new 90,000-capacity Wembley Stadium.

Other landmarks that have been supported by the significant design, manufacture and supply capability of Bison Precast, but which we might take a little more for granted, include the mighty new Catthorpe Interchange in Leicestershire – where the M1 meets the M6 and the A14 trunk road – for which 7,000m² of Bison Precast’s Omnia Bridge Deck concrete units were provided; Ilkeston Railway with its 100-metre-long platforms, made up in total by 230 precast concrete units weighing a combined 700 tonnes, which is expected to serve up to a quarter of a million passengers a year; and the Dawlish sea defences which were rebuilt with nearly 100 three-metre-high heavy-duty bespoke precast concrete retaining walls, and more than 150 precast seawall units, each weighing around 15 tonnes, as part of urgent works to get Dawlish railway back on track after the existing defences and part of the railway line were destroyed in the heavy storms of 2014.

This is in addition to numerous apartment buildings, hospitals and other significant structures that are helping to regenerate, transform and serve communities up and down the UK.

In 2017, Bison was acquired by leading building products manufacturer Forterra, which already had two precast concrete production sites in Somercotes and Hoveringham, neither of them far from Bison’s base in Swadlincote, Derbyshire.

Operating under the new name of Bison Precast, the move would create strength through the combined expertise, skill and experience of the two businesses, making it one of the biggest precast concrete manufacturers in the country, and the largest manufacturer of precast flooring.

This impressive Bison Precast team is continuing the innovative approach of its predecessors in developing pioneering techniques that are at the forefront of offsite construction. Its precast frame solutions are reducing build times, improving health and safety, and helping alleviate issues of labour availability.

Bison Precast is also taking full advantage of its access to Forterra’s clay brick expertise, working with its counterparts to break new ground in the world of precast architectural solutions, the latest of which is being used in the construction of Kier’s new Wellingborough Prison scheme.

Bison Precast’s new, insulated, brick-faced sandwich panels are a great example of what can be achieved when precast concrete expertise is combined with clay brick manufacturing know-how.

The Wellingborough Prison project is one of the first to benefit from these new panels, which are part of Bison Precast’s ever-expanding Architectural Precast range.

Mike Nelson, commercial director at Bison Precast, commented: “In pairing innovative design with high tech manufacturing capabilities, our new insulated, brick-faced sandwich panels are supporting the move to DfMA, which is so important in the successful and timely completion of schemes such as Wellingborough Prison.

“Our new brick-faced sandwich panels enable us to take any clay brick option from the Forterra range and cast it into precast concrete panels. For Wellingborough Prison, Forterra’s Butterley Golden Thatch is the clay brick used, and will provide an attractive external façade to the key public-facing building on site. This technique means that design and aesthetics of DfMA schemes – such as multi-storey residential, commercial, institutional and industrial developments – needn’t be limited, which is a real step forward in delivering high quality schemes, quickly.”

Building for the future

Mike has little doubt that key to Bison Precast’s continuing success is its skilled and loyal workforce, many of whom have worked for the business all their working lives. “Any business is only as good as its people. Over the years, I have witnessed a deep sense of loyalty and identity within the Bison workforce, and the number of employees who have received long service awards is testament to this. It’s an attitude and work ethic that began with our founders back in 1919 and their commitment to serving not only the construction industry but the country, too.”

As well as continuing to deliver the pioneering products and methods honed over the last century, Bison Precast is looking to continue to develop new products and opportunities, particularly in the area of offsite manufacture, that should see the company thrive long into the future.