The robotic arm is a technology that is used in multiple industries. A paper published in the journal Sustainability has explored the use of this technology in constructing modular buildings in colder regions, where building projects may be limited by the constraints of daylight hours and low temperatures due to the needs of human operators.

Meeting the demands of modern society has driven technological innovation in multiple industrial sectors. Consequently, technological progress has prompted individuals to demand more from their living environment in terms of aesthetics and functionality, leading to building designs that provide a safer, more convenient, and comfortable environment for inhabitants. An increasingly fast pace of life and population growth facilitates increased construction efficiency. 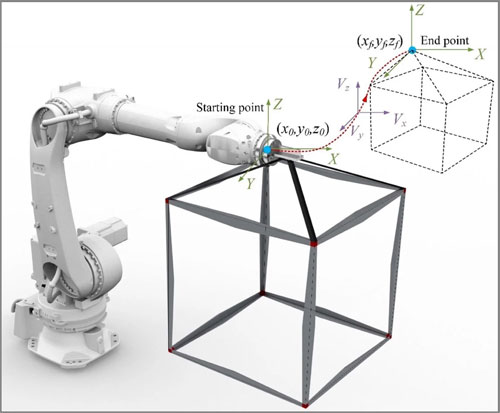 Robotic arms are high precision, multi-input and output, nonlinear, and coupled complex systems. Their operational flexibility means they are used in a variety of hazardous environments, industrial assembly processes, and other fields. Contemporary trends in the construction industry, such as standardized design, rapid construction, and refined construction, have facilitated the adoption of innovative technologies.

Robotic arms have significant potential as a breakthrough technology in the construction sector. They can replace human operators in harmful environments, perform heavy manual labor, improve the safety of construction projects, and accurately complete repetitive motions. The development of a standardized process from design to construction will aid the application, adoption, and promotion of robotic arm technology in building projects across the world.

Originating from industrial design, modular design is a concept that is conducive to the standardization, generalization, serialization, and combination of industrial production. The overall product is deconstructed into modular units. The concept has been applied in numerous industrial fields such as aerospace, automobiles, electrical appliances, and construction.

The modular design method was adopted by Ford in 1913 for their production lines, and since then, architects have employed modular design to save costs and standardize buildings. Applied to architecture, modular design combines separate standardized modules with similar properties and sizes to create an entire building. 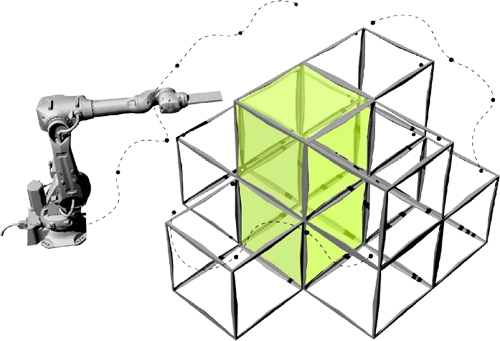 Modular design is economical, as units can be produced in a factory, saving cost, materials, and time. It enhances reproducibility as units are constructed to a standardized design, and units can be replaced and recycled. Finally, there are environmental benefits due to reductions in waste, the adoption of emergent design ideas, and the building area can be adjusted due to functional needs.

Modular building projects are based on the client’s functional needs, modules are designed by an architect, and the project is assembled on-site by construction teams. However, a building that is too standardized may not meet the differentiated needs of modern society. To meet these demands, digital manufacturing has become increasingly utilized in modern design.

Robotic arms are highly adaptable, and superior precision and rapid assembly can be realized by using this technology. Moreover, combining modular production with robotic arm technology can drive down traditional costs associated with construction. Computer-aided design facilitates the customizable design of modules.

Large populations live in the colder regions of the world. The same as any population, individuals living in these areas require structures for domestic and commercial purposes. However, building projects in these regions face unique issues with daytime hours and frigid temperatures, especially in the winter months. The use of robotic arms in colder regions is the central focus of the new research paper published in Sustainability.

The environmental issues faced by construction projects in these areas become apparent when human workers are considered. Cold weather and limited daylight hours are major health and safety concerns for construction workers and project managers.

The main advantages of automation and robotic technologies for building projects in colder regions are obvious. Firstly, robotic arms can operate in extreme conditions and even in hours with reduced daylight. Secondly, they can perform tasks more accurately and repetitively than human workers. Thirdly, they can carry out more complex construction in a three-dimensional space.

Current literature has mostly concentrated on the applications of the technology for masonry processes using small bricks and blocks, with a lack of focus on the installation of complete modules. Thus, the new research in Sustainability has investigated the use of a robotic arm design for the assembly of overall models and integrating this concept into the entire design and construction process. A complete design method for robotic arm assembly of modular units in colder regions has been developed by the researchers. The researchers used a case study of the construction of a museum in Harbin, China. The design and construction process was entirely simulated, and design and application limitations were investigated and discussed.

The authors have proposed several design strategies and methods for modular construction utilizing robotic arm technology. Furthermore, they have identified current limitations which will inform future development and implementation of robotic arms, especially for construction in colder climates. Overall, this study is a preliminary exploration of the use of robotic arms for modular building projects in colder climates.

INDUSTRIALISATION, AN OPPORTUNITY TO DIVERSIFY