Blog - Latest News
You are here: Home / Article / Is it Groundhog Day for construction, or a firm footing for fresh grow... 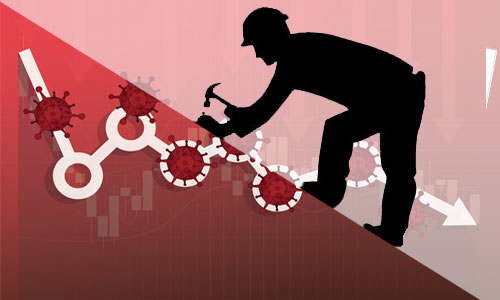 Construction journalist and civil engineer, Bruce Meechan gives his perspective on the challenges, and opportunities, presented by the pandemic disruption.

Many commentators as well as Government Ministers are using the phrase ‘new normal’ in reference to the way we will have to live, work and shop for years to come because of the continuing threat posed by Covid-19: the most globally lethal pandemic since the Spanish Flu claimed millions of lives in the aftermath of World War One.

For those of us who have spent our careers in construction, however, there is a justifiable sense of déjà vu regards the impacts of the virus. Yet again our industry has been at the economic epicentre of a recession that has shut sites, closed companies and cost countless workers their jobs.

While many UK businesses simply told their staff to stay away from the office, for tradespeople who spend their days wearing hard hats and steel toecaps, working from home simply wasn’t an option – you just can’t lay bricks on Zoom. Meanwhile those whose building projects were sanctioned as essential, ran the risk of catching the virus by simply travelling to work – a danger made worse in the capital where the posturing mayor chose to cram people into fewer Tube trains.

Now though, with the infection rate apparently receding, and the longest days of summer upon us, building sites and businesses generally are reopening. What then are the prospects for those of us whose livelihoods are dependent on new build developments, RMI work and infrastructure schemes?

As I count this as my fourth recession since I left polytechnic in 1979 and began work with George Wimpey, I believe there are a number of reasons for optimism.

Firstly, it should be noted that the economy was actually in pretty good shape as we began the year, with record numbers of people in employment, the stock market surging and most businesses in a bullish mood. Even die-hard Remainers and lifelong Labour voters must have felt relief at ending three years of parliamentary deadlock.

For everyone apart from a few Chinese scientists and communist party officials, the Coronavirus came completely out of the blue. Even in February as reports were leaking out from this secretive society, and the early cases were occurring in the West, the idea of a pandemic bringing everything to a halt seemed implausible.

Then the pubs shut and the rookie Chancellor had to conjure up an unprecedented rescue package for the economy. And as we peeped out at empty streets, or cursed empty supermarket shelves, the equally green new Bank of England Governor blithely predicted a V-shaped recovery.

According to economists now, we’re looking at a U-profile and, bizarrely, the Footsie has seen its best three-month rise for a decade, with some ‘green shoots’ emerging globally. In the US – where Covid-19 devastated many states – unemployment peaked well short of the worst predictions, while the IMF fancies China will bounce by 8% next year.

From a personal perspective I can report that not only did hardware stores stay open to service the lockdown lust for DIY, but a lot of independent merchants and small builders barely paused their activities.

Undoubtedly the building industry benefits from a can-do attitude, which shames our teaching unions and professions such as dentistry (for whom infection control should be a given at all times), who have sat back complaining about lack of clarity from Ministers.

By contrast, most of our major housebuilders had begun recalling middle management and site safety officers in May or earlier, to devise strategies for safe working. And while the clothes retailers were agonising over the viability of quarantining any clothes customers might try on, Taylor Wimpey was announcing a £500 million land purchasing spree, and committing to pay back the taxpayer money it had received under the furlough scheme. TW boss, Pete Redfern said: “We have seen robust demand throughout the lockdown and have been encouraged by the continued resilience of the housing market.” Redrow is another top housebuilder pledging to hand back billions.

I was further impressed to hear from Chris Hamlett, the MD of northwest based main contractor, Armstrong Projects, who told me his company had only furloughed one worker: an individual with a long term respiratory condition. Other staff had been retrained to work under the safe distancing guidelines and related restrictions, as well as to cover special inspection disciplines temporarily not available via normal channels.

Not only had Armstrong Projects’ three main sites in Manchester, Warrington and Crewe all continued, but the group has recruited two new employees to help launch a venture called Pod Life; building home offices for customers through the adoption of an ICF system.

The latter is of particular significance, because offsite technologies would seem ideally suited to addressing many of the obstacles which Covid-19 requirements pose for traditional building techniques.

We have known since the Eden Report shone a light on our industry’s failings two decades ago that system building increases productivity, predictability and quality of outcome, while reducing defects and injuries to personnel. Now there is the added bonus that transferring operations offsite and into a controlled factory environment should mitigate the chances of transmitting the virus.

The Prime Minister’s speech at a West Midlands plant this week not only pledged £5 billion to build new schools, hospitals, housing and infrastructure, but to build “Better, greener and faster,” with a revolution in UK technology to the fore. Modern and mainly offsite methods of construction must be the best way to deliver on those promises.

Finally, let us remember how this crisis came about, and where it came from.

The Government is rightly backtracking on involving Huawei in our 5G network – which posed a real threat to national security and access to Five Eyes intelligence sharing – and is also reviewing China’s role in our nuclear energy programme. A direct, multi-billion pound beneficiary of the latter should be the consortium involving Rolls Royce and major construction companies, seeking to deliver modular nuclear reactors for sites around the country, and even for export.

One thing the pandemic and the connected PPE shortages has demonstrated is the imperative for our country to be self-sufficient in essentials; including low carbon energy. I would argue, therefore, that our corporations and our communities should look to UK manufacturers as well as our own construction companies to deliver the properties and infrastructure we need for everyday life to continue: whatever that new normal looks like.

JCB – FROM DEISEL TO HYDROGEN