Blog - Latest News
You are here: Home / Energy Efficiency / Watts on wheels … a new way to power construction from Australia

Road building projects come and go. No one wants cranes and diggers lurking on our streets longer than necessary, with traffic diverted one way and the other. The trick is to get the job done and move on. But how do you rig up cheap, clean electricity to temporary construction sites? That sounds too hard. Just hire a dirty diesel generator and be done with it.

Not so fast, says a company that has literally rolled out a simple but very effective PV power plant supplying an infrastructure project in southwest Melbourne.

At Hoppers Crossing, where a level rail crossing on Old Geelong Road is being replaced with a traffic and pedestrian bridge, an 80kW system is powering eight site sheds with clean solar energy. Black Stump Technologies’ “mobile renewable generator” consists of two 20-foot shipping containers, each fitted with an array of 40 solar panels that can be rolled away and locked into the containers at day’s end so no-one’s tempted to mess about with them overnight.

“It doesn’t have to be rolled away and locked up … but it can be,” says Black Stump national accounts manager Tom Small. “In the bigger picture it’s designed to be easily moved from site to site.” 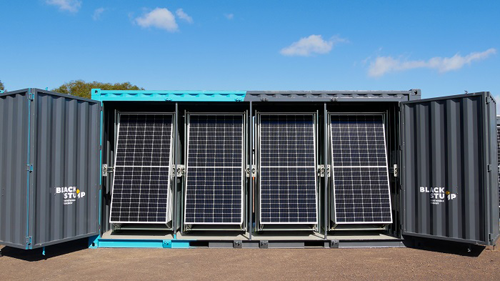 Solar may be growing fast across the suburbs of Australia but it is seldom possible to get close to the stuff, so generating solutions that can be rolled out like a picnic blanket at shoulder height will play a role in piquing the interest of the passing throng.

The plant will work at Hoppers Crossing for about a year and then move on to another role, just like any worker who follows work around town. Surplus energy from the plant is exported to the grid to earn the feed-in tariff.

A 20-year warranty on the Longi panels and 10-year warranty for the Fronius inverters assure Black Top’s containerised system a long working life. The castors the framework rolls about on are big enough to manage “reasonably level” ground, he says. A stricter requirement for deployment is that a site should have no shading – or as little as possible.

For Small the solution goes right to the heart of sustainability, where the whole point is “to stop disposing of things”.

Black Stump started its journey about five years ago, directing its efforts first of all to the aid industry. When communities in far-flung parts of the Asia-Pacific are hit hard by natural disasters its vital to restore essential services as quickly as possible, but electricity may have relied on frail connections destroyed by the raging elements.

“Our containers were designed to be shipped out and deployed rapidly, within an hour or so of arrival,” Small says. The handy mobile plants have also been used in remote locations around Australia, some of them literally on the other side of the black stump.

As construction and infrastructure companies rein in emissions, Black Stump wants to remind them clean energy solutions can be delivered and plugged in as modular units. “We want to replace diesel in construction,” says Small, conceding that it will take a lot more available ground to host a roll-in, roll-out solar plant than a diesel generator. “We’re going to start where there is room … we need sites that are flat, have no shade and where there is some space.” He guesses about 30% of construction sites qualify.

Hoppers Crossing has seen 20 near misses since 2012 and holds up more than 20,000 vehicles per day. Across Melbourne, more than 46 level crossings have been removed, with more than 20 sites in construction and more in planning.

Diesel is an unpleasant fuel source, responsible for producing particulate matter, nitrous oxide and carbon, but it’s convenient and predictable. A site that relied on Black Stump’s solar technology would most probably rely on diesel and the grid for balancing – especially in winter – but the company is ambitious to take business from diesel in the long term.

The containerised plants can also include a battery or diesel genset running on biodiesel or regular diesel. “We try to target about 80% renewable generation using a combination of solar and battery,” Small says. “As battery prices come down we are going to try to squeeze diesel out – but batteries are expensive.”

RESEARCH COULD SPEED UP CONSTRUCTION OF STEEL FRAMES
Scroll to top