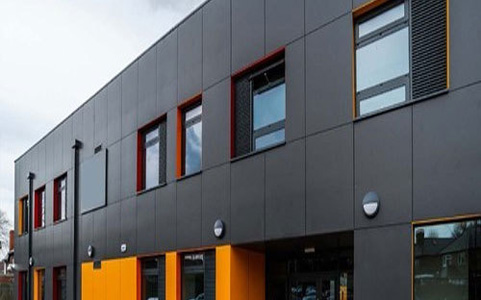 More than 100 more tower blocks must be urgently stripped of combustible cladding panels in a significant widening of the fire safety crisis since the Grenfell Tower disaster.

High-pressure laminate (HPL) panels, often made from compressed wood and paper and used to produce colourful patterns on new buildings, should be removed “as soon as possible” from housing taller than 18 metres, the government’s expert panel on fire safety demanded on Thursday.

The order (pdf) could affect thousands of tenants and leaseholders who previously believed their homes were safe. Industry experts believe at least 100 residential tower blocks will be affected.

Delays to safety reforms ‘risk a repeat of Grenfell disaster’

It is not the first time concerns have been raised over HPL cladding. Essex University is removing the panels from a student accommodation block in Southend after it was found to be in breach of building regulations despite being signed off by a building inspector.

The announcement is likely to mean fresh rows over who should pick up the bill, with the cost of stripping and replacing cladding often exceeding £20,000 for each household. There is no sign that the government is planning a bailout.

Experts, led by Roy Wilsher, chair of the National Fire Chiefs Council, said that following fire tests it had become clear that many HPL panels were “very unlikely to adequately resist the spread of fire”.

“Building owners with these systems should immediately take action,” the fire safety panel said. “Action to remediate unsafe HPL should be carried out as soon as possible.”

HPL is widely used but the government has only recently tested it, having focused on cladding similar to the aluminium composite material (ACM) that helped spread the fire that claimed 72 lives at Grenfell.

Labour said it was a disgrace that ministers “waited until two years after Grenfell to confirm to people that they have been living in potential death traps”.

Sarah Jones, the shadow housing minister, said: “The government must immediately require building owners to check for this cladding, as they did with ACM, so we know the scale of this problem. Ministers must set a hard deadline to replace all dangerous cladding and toughen sanctions against block owners that won’t do the work.”

Work to remove ACM panels have been slow, with only a quarter of the 433 high-rise residential and publicly owned buildings identified as needing remediation having been fixed, leaving tens of thousands of people living in potentially dangerous buildings.

Householders have mounted night patrols to look out for fires. Many have described serious mental health problems and even suicidal thoughts as a result of the stress that comes from potential bills in the tens of thousands of pounds and homes plunging in value.

“We have seen the distress caused to tenants and leaseholders and that will now increase,” said Stephen Mackenzie, an independent fire safety consultant. “This could affect thousands of people. The government needs to get a grip of this.”

The government said it had always insisted it was the obligation of building owners to ensure that homes met building regulations and that materials used have undergone fire testing.

James Brokenshire, the housing secretary, said on Thursday that all buildings with ACM cladding must be fixed by June 2020 or their owners would face “enforcement action”, although he did not specify what that would be.

The new order for HPL to be removed is likely to fuel fears that further fire safety problems could yet emerge. This week Neil O’Connor, the director of the Ministry of Housing’s building safety programme, wrote to all local authority chief executives requesting that they identify the external wall materials and insulation used on every high-rise residential building over 18 metres tall in council or private ownership in their areas.

He did the same with social housing landlords and said the government “continues to consider safety risks to high-rise buildings”.

A housing ministry spokesperson said: “There should be no buildings in this country with this combination of cladding and insulation. Building owners are legally responsible for ensuring the safety of their buildings and need to make sure this is the case. They should be well aware of their responsibilities as we issued clear-cut advice in December 2017, reinforced last December, telling them to check that only safe cladding and insulation combinations had been used on their buildings.”

Construction needs to evolve with AI