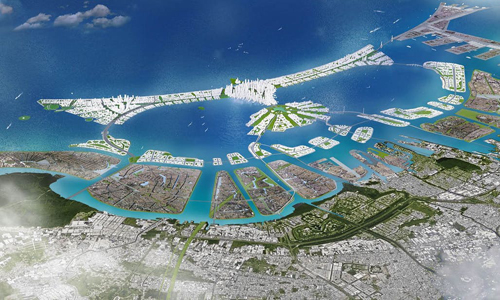 Jakarta, already 40% below sea level, is building one of the biggest sea walls on Earth.

Jakarta sinks an average of three inches a year, and parts of the coast are going down as much as 11 inches a year.

In an attempt to halt the damage, authorities are building a gigantic wall off the coast, measuring 25 miles (40 kilometers) long and 80 feet (24 meters) high, National Geographic reports. To fund the $40 billion and 30-year-long project, the city will also create 17 artificial islands, on which developers can build luxury homes, offices, and shopping malls.

A Dutch firm, KuiperCompagnons, is assisting with design. The first phase of the three-part plan is underway, although critics say that the project will encourage more government corruption and actually cause more environmental damage than it would help prevent.

Meanwhile nearer to home the global warning is an increasing threat to the seaside communities that pepper our shores.  The rising seas will land that has housed villages for hundreds of years.   The Welsh coast is particularly vulnerable, where the village of Fairbourne could be the first UK community to be washed away. 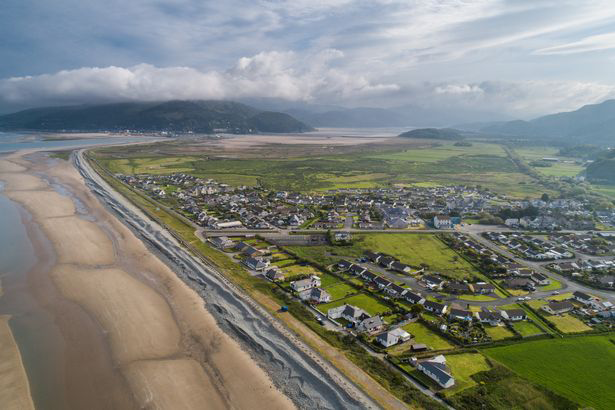 In 26 years – or sooner, if forecasts worsen or a storm breaches the sea defences – a taskforce led by Gwynedd council will begin to move the 850 residents of Fairbourne out of their homes. The whole village – houses, shops, roads, sewers, gas pipes and electricity pylons – will then be dismantled, turning the site back into a tidal salt marsh.

No one really knows exactly what is going to happen as the earth’s atmosphere warms up and sea levels increase. But it is pretty well accepted by now that for those communities living on the coast, protecting their homes and livelihoods will almost certainly get tougher.

Since 1990, the mean sea level around the globe has risen by around 20cm. The latest estimates by DEFRA indicate that between now and 2025 they will rise a further 2cm. By 2050, they are set to rise by more than 25cm. And in 100 years, we should expect to see sea levels some 1.05m higher than they are today.

It’s a scary thought, especially for villages like Fairbourne where much of the land is already below the level of normal high tide.

He said: “There is a limit as to how high defences could practically be raised. The relocation of communities is a very traumatic solution, but may require consideration in the most extreme cases.”

Detailed shoreline management plans will dictate exactly how sea level rise and coastal flooding will be managed around the Welsh coastline over the next 100 years, and whether defences can continue to be maintained, or if they should be changed or even left alone in future.

There are 48 areas around the Welsh coastline where some homes may be impacted on, the following is a list of those most at risk.

Existing defences will be maintained in the short term then allowed to fail. This is likely to result in the loss of residential and non-residential properties along the coast.

Although the defences would be maintained for as long as possible, they will be allowed to fail. This would result in increased flood and erosion risk and potential loss of frontal properties.

There remains a risk of coastal flooding (and erosion) to Laugharne village since a surge barrier was not constructed, as the local community were primarily concerned with the associated aesthetic impact on the village.

In the long term, the aim is to undertake a managed realignment scheme at Pendine. As a result of this, some seafront properties are likely to be lost.

Once the existing defences fail the shoreline will be allowed to naturally evolve and retreat which will result in the loss of frontal properties.

The village used to have a second row of terraced homes on the beach side of the road, but these were completely destroyed after severe winter storms in the 1890s and 1930s. Major erosion along the shore swept away homes, workshops, gardens, garages and boathouses which are now but a memory in old photographs.

Properties are likely to be lost due to coastal erosion at Wiseman’s Bridge where defences will be maintained in the short term, before being allowed to fail.

Flood and coastal erosion risk will continue to increase over time. This policy is subject to a further detailed study to investigate the future risk, but options for adaptation measures include protection measures or relocation of properties.

Along with the road, increased flooding to the valley is likely to make the properties and businesses untenable after 50 years or so.

Expected that some properties together would be lost within the next 10 to 30 years.

There is the need in the future to adapt use of the lower village and the very probable need to relocate people in the future as sea level rises.

Plans involve the relocation of property owners and businesses from Fairbourne

Possibility for local defence but recognised to be major changes in expectation for continued defence and significant resource would be needed to manage this change.

It is not considered realistic to commit to the increasing cost of maintaining and raising defences upstream of Penmaenpool. Consideration might be given to local defence of specific property.

This is likely to require some future realignment of the defences, quite probably with the loss of property.

It is not considered sustainable to maintain the shoreline defence over the period of the SMP. To take this approach would require developing a plan for moving people and businesses from the area.