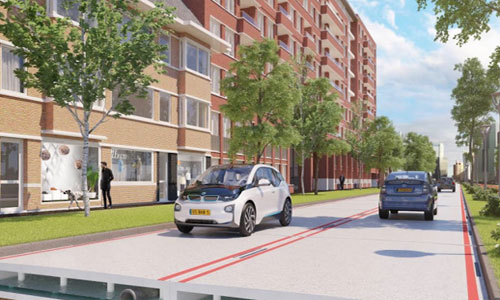 PAGE DOWN FOR THE VIDEO’s

Imagine a road with no asphalt, no concrete, just post-consumer plastic waste. This is possible in the Netherlands!

Smart City developments are rapidly advancing the way we live, work, and commute in our daily life. Smart City infrastructure is currently seeing a high-level of innovation toward a more sustainable future in the Netherlands. Using post-consumer plastic waste PlasticRoad builds sustainable roads of plastic reducing plastic pollution along the way.

Consumer plastic waste represents a serious problem that is damaging the environment and many species on the planet. Globally, more than 40 species of fish are known to consume plastic. Eventually, that plastic reaches human plates.

Packaging alone generates 141 million tonnes annually of single-use plastic waste, being responsible for almost half of global plastic waste. This is the sector which also uses the most plastic: 146 million tonnes per year, representing 42 percent of the global total.

The innovative and unique concept of building roads made of plastic contributes to solving the overwhelming problem of plastic pollution. The idea of plastic roads was conceived by looking at the problems that municipalities, provinces, regional water authorities and contractors deal with on a daily basis including societal problems such as plastic waste, extreme precipitation, consolidation of the subsoil, an increasing need for mobility, and a crowded subsurface as well as the increasingly stringent requirements for future roads.

The increasing demand for more functionality from roads began to raise the question of whether the traditional asphalt is still the answer to these increasingly stringent requirements.

If roads in smart cities should have an increasingly longer lifespan, shorter construction and maintenance time, be more sustainable, achieve ever-higher noise reductions, and also be financially competitive then roads made of plastic is what ticks all the boxes and what inspired the idea of the PlasticRoad initiative.

Zwolle is a city west from Amsterdam, reachable by train in just one hour. Zwolle is both historical and trendy. The city hosts one of the biggest markets in The Netherlands with 450 stalls. Art works from Dutch painters Vincent van Gogh and Piet Mondriaan delight art lovers who visit the Museum of Fundatie.

It is here, in Zwolle, where the world’s first plastic road prototype was built using recycled single-use plastic.

The first internal trial was ready in 2016. For over a year, cars and small trucks drove over the small plastic road every day without presenting any difficulties. Finally, in 2018, Zwolle became the first official city in the world to have a truly plastic road.

The Netherlands is well known for its heavy use of bicycles that populate the Dutch cities contributing to the promotion of clean and fresh air, daily exercise, and less general pollution.

On September 11, 2018, a 30-meter bike path opened to the public in Zwolle. The road includes sensors which collect data proving information for further development, space for services to run underneath, and its own stormwater management system.

Building the plastic road presented many advantages including cheaper materials than traditional road-building materials and less time required for complexion before the road was fully installed.

The video below shows how the plastic road was installed:

After the success of the first plastic road, a second one was installed in late 2018 in the city of Giethoorn, also in The Netherlands. In this occasion, the goal was to test how the plastic road responded in weak soil conditions.

PlasticRoads plans on building more bike paths, pedestrian areas, and car parks around other cities in The Netherlands. Looking into the future, the three PlasticRoad partners are planning on building urban highways made of plastic.

It takes 10 years to 1,000 years for a single-use plastic bag to decompose. Plastic bottles take 450 years, in many cases it could take even more than that. Think all the plastic bottles you have discarded in your whole life will still be around polluting the planet centuries after you die.

PlasticRoad is an innovative concept initiative of KWS, a Royal VolkerWessels company and market leader in road construction and the production of asphalt in The Netherlands. KWS partnered with Wavin, a company which operates within Orbia, and is a market leader in the recycling of plastics as well as specialist in making recycled plastic products for drain water drainage, and also with Total, to improve the properties of plastic, the recycling of plastic, and the available production techniques.

It all started when leading road builder KWS’ engineers came up with a smart solution to build more sustainable roads: Using plastic. Since then, the group has grown with partnerships that join forces to make cities smarter and sustainable.

Orbia is a purpose-driven company that aims to advance life around the world by focusing its business solutions on addressing six of the world’s biggest challenges aligned with the UN Sustainable Development Goals. One of them is to make cities more livable, lovable, resilient, and regenerative.