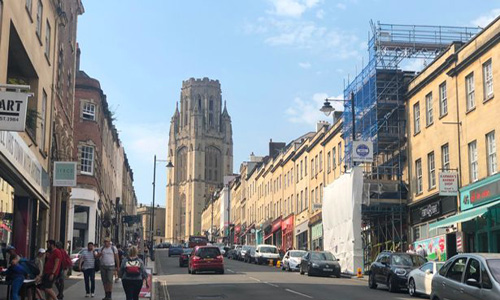 Park Street is set to be closed for three nights next month when a number of pre-built flats are craned into an old nightclub.

Bristol developer Urban Creation has applied to Bristol City Council to close the road while it transports a number of apartments into the empty building at 50 Park Street.

The nine apartments, which were built in Southampton and are already decorated with bathrooms and kitchens, will be craned overnight from 11 to 13 August.

The flats will be lifted through the open roof of the stripped-out building and placed on top of one another.

A team of builders has already stabilised the property with a steel structure ready for the lift-in.

It is believed to be the first time in the UK that homes have been specially made to fit into an empty, existing property.

Jonathan Brecknell, director at Urban Creation, said: “We’re very excited to be taking modular construction to a new level, using a highly innovative approach that could have huge implications for home building in the UK.”

When Urban Creation bought the building last year it was empty and in a dilapidated condition.

The property was built in the 1950s after the previous building was bombed during the Second World War.

Modular construction company Go Modular, which built the ready-to-go homes, has teamed up with Urban Creation on the project.

The homes at 50 Park Street will be let out to students.

XL joinery – caring for the Amazon

THE 7 STAGES OF MMC H+H Celcon asks Does Aircrete have a future with MMC?
Scroll to top