London’s Serpentine Galleries have reopened their spaces to the public in May and on June11th , the Serpentine Pavilion 2021 designed by Counterspace, the architectural studio directed by Sumayya Vally, opened its doors. It is the 20th pavilion of the famous gallery which, for this edition, extends out to the city with four installations placed in different neighbourhoods across London, recognisable as four fragments of the pavilion.
Sumayya Vally who, as per tradition when it comes to the pavilions is completing her first work in the UK, as well as being the youngest architect to be commissioned for this renowned programme.

The pavilion’s inauguration is a splendid sign of the post-Covid 19 reopening efforts, extending across the city through the four installations located in different neighbourhoods in London and recognisable as four fragments of the same pavilion. A happy ending, to a very challenging year. The inauguration was, in fact, originally set to take place on June 11, 2020, when the lockdown initiatives undertaken by the city in order to contain the Covid-19 pandemic resulted in the full suspension of the Serpentine Pavilion programme and its postponement to 2021. Moreover, after a year marked by compliance with social distancing rules, the new Serpentine Pavilion extends across London to support and facilitate gatherings and participation in different locations of great importance, above all, for their diasporic and cross-cultural communities: those groups of individuals who, as a result of migratory processes have reconstructed themselves in contexts other than those of their origin. These neighbourhoods include Brixton, Hoxton, Tower Hamlets, Edgware Road, Barking and Dagenham, as well as Peckham. 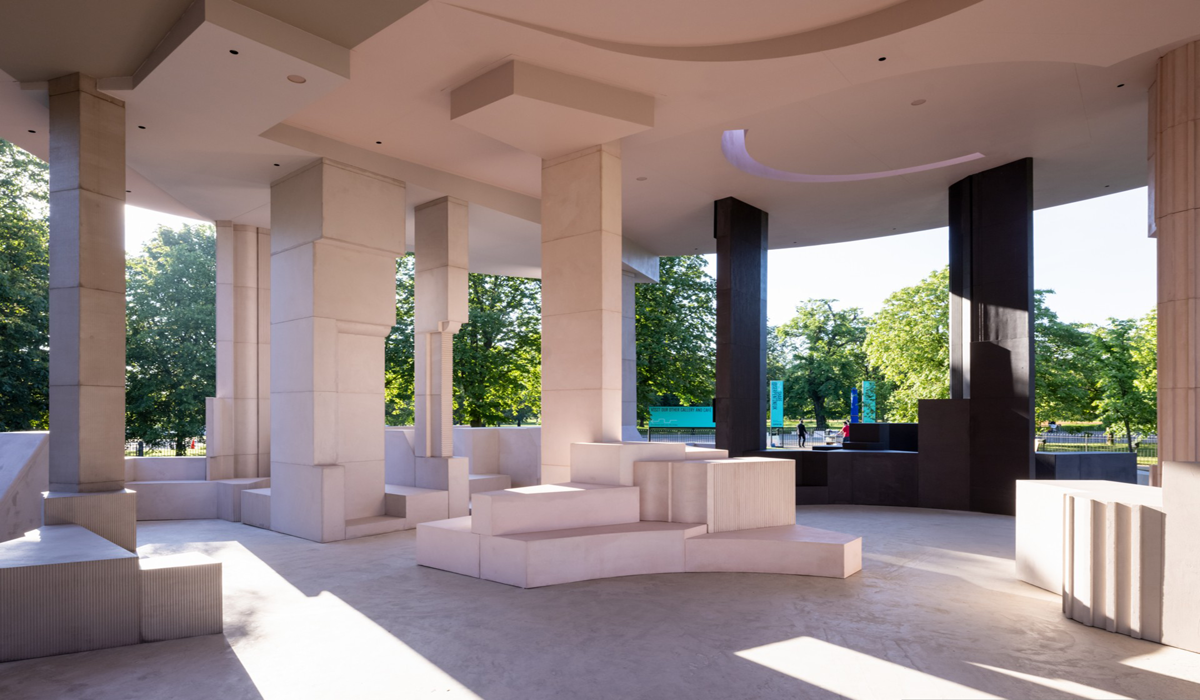 The Pavilion designed by Counterspace pays tribute to these places, which in some cases still exist, while in others are no longer with us. Religious places like some of London’s first mosques: the Fazl Mosque and the East London Mosque. Places hosting cooperative bookshops such as Centerprise and Hackney. Entertainment and cultural venues like The Four Aces Club on Dalston Lane, The Mangrove restaurant and the Notting Hill Carnival. Four installations designed and created precisely to reinforce this theme and its connection with the city.
Four fragments of the Pavilion installed in 4 locations across the city, carefully selected to reflect this close bond: the headquarters of the first black publisher and bookseller in the UK Beacon Books in Finsbury Park; The Tabernacle multipurpose venue and community centre in Notting Hill; the Albany art centre in Deptford; and the new Becontree Forever Arts and Culture Hub at the Valence Library in Barking and Dagenham, which commemorates the centenary of the UK’s largest municipal residential complex. The installations are not an end unto themselves, but have been created specifically for the places where they have been installed and are used as display stands for books, seats, benches and more.

Offering a viable answer to the scarcity of informal gathering and interaction places, the pavilion presents itself as a new meeting place in London’s famous Kensington gardens, with its abstract form inspired by the superimposition and union of architectural elements on different scales borrowed from the city itself. The different textures and shades chosen for the pavilion, made of recycled materials such as steel, cork and wood covered with micro-cement, also take inspiration from the city of London and its rich architecture.

As per tradition, the Serpentine Pavilion will host the summer program of initiatives of the Serpentine Galleries which, for the first time, will also include a music programme entitled Listening to the City that once again aims to link the pavilion to various neighbourhoods across London and their sounds. A Scholarship and Grant Programme, Support Structures for Support Structures, has also been created to help sustain artists from different London communities.