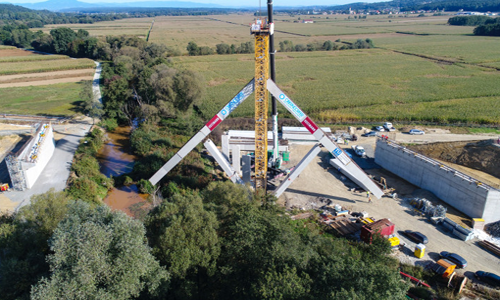 The technique works like an umbrella: The bridge is assembled vertically, then lowered and “opened” with hydraulic joints.

Engineers from the Vienna University of Technology (TU Wien) have developed a futuristic twist on building bridges and demonstrated the technique for the first time in Austria last week. The umbrella-like technique resembles the opening and closing of an umbrella over a river.

The traditional way to construct a bridge happens piece by piece: either the engineers make use of scaffolding or use piers to act as vertical load-bearing structures. In order to keep balance, things progress bit by bit, and the bridge is carefully built outwards in any direction.

According to the researchers, this new bridge construction system is expected to be much simpler, faster, cheaper, and has a less environmental impact.

The team had been working on the new method for years: the idea was patented in 2006, in 2010 first tests were carried out by TU Wien. The technique involved hollow girders being mounted to a pier in an upright position. Girders would be joined at the top, and then, would be gently unfolded downwards.

The researchers implemented the new technique for the first time over the Lafnitz River on the border of Austria and Hungary, where Austria’s new S7 motorway is being constructed.

As it was imagined on the paper, the bridge, which is roughly 236 ft long, was assembled vertically instead of horizontally and lowered with bendable hydraulic joints that mimic an umbrella’s internal movements.

You can watch the bridge unfold here:

Once the hollow girders were lowered all the way through and horizontal, they could be filled with concrete to complete the structural components of the bridge. According to the team, this technique provides a bridge of the same durability as the traditional methods, while saving a lot of time.

Johann Kollegger of the Institute of Structural Engineering of TU Wien says, “Erecting bridges using scaffolding usually takes months. The elements for the balanced lowering method, on the other hand, can be set up in two to three days, and the lowering process takes around three hours.”

In this case, less time equals fewer costs, and the method could prove extremely useful in areas with uneven terrains or nature reserves that are ought to left undisturbed.

Moreover, it would be much safer for workers since after the umbrella-technique there is only a safe and completed bridge ready to fill in and finish.

If the practice catches on, this might be the future of constructing bridges.

Wuhan’s Modular 10 day hospitals have ‘Got It Done’